Skip to content
My Story
Textile Care
History of Costumes 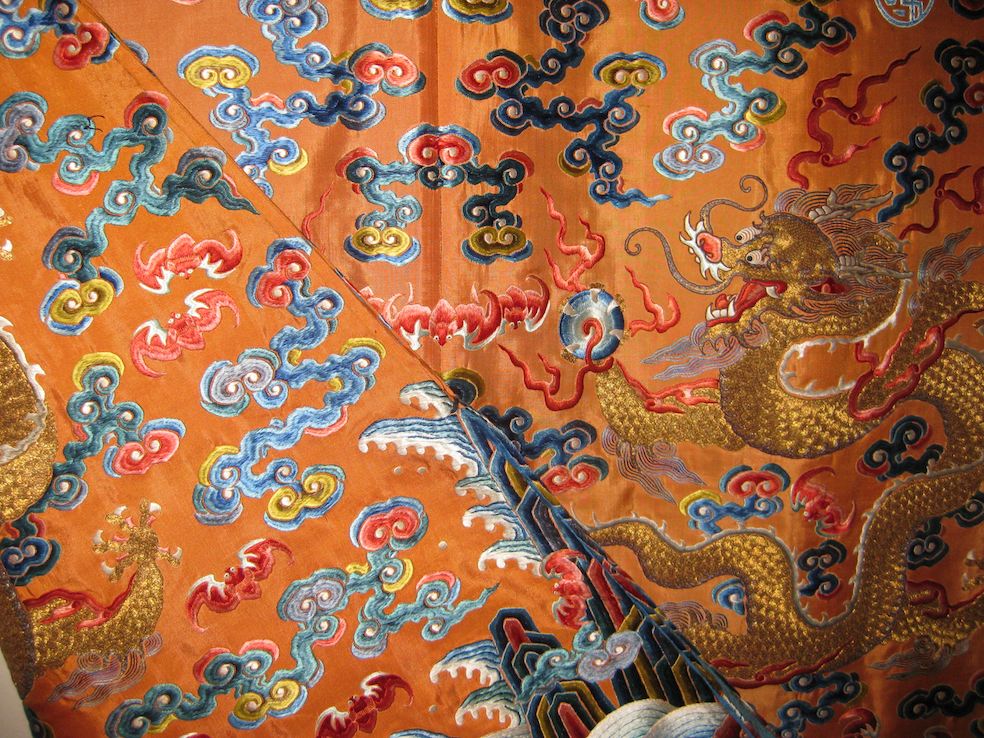 No other work of art, porcelain, jade or painting, brings one so tantalisingly close to the splendour and power of the Forbidden City under the sway of the Manchu clans. The dragon robe could justifiably be argued the Qing dynasties unique contribution to Chinese art. The origins of the dragon robe reflect both those of the Qing dynasty itself and of the ancient culture that the Manchu inherited from previous Chinese dynasties. The Qing dynasty was the successors of the Ming (1368-1911), the last native Han Chinese imperial house. During the first half of the 17th century the Ming dynasty began to be eclipsed by a new force gathering beyond the Great Wall. The semi-nomadic Manchu tribes were being forged into a nation with its own language, culture and social organisation under the brilliant leadership of Nurhaci (1559-1626). By 1636, the Manchu were strong enough to find their own state in the north-east and command the allegiance of the Mongols. In 1644, the exhausted Ming dynasty collapsed in the face of an internal rebellion. Seizing their opportunity, the Manchu swept across the Great Wall and seized the imperial capital, founding the Qing or Pure dynasty.

Among the first acts of the new regime was to impose Manchu styles of dress on the native Han Chinese population. Men were forced to wear their hair in a queue or pigtail as a token of their submission to the new dynasty and adopt the Manchu horsemen traditional riding robe. This was a close-fitting, full length garment with front and rear vents to allow the wearer to easily mount and dismount a horse. The narrow, tapered sleeves were finished with horse-shoe shaped cuffs that gave protection to wearers hands. In contrast to full cut and exaggeratedly wide sleeves of Ming style garments, the Manchu robe was essentially a practical garment and its adoption as standard wear emphasised the distinctions between the nomadic origins of the Manchu and the sedentary, agrarian Chinese civilisation. 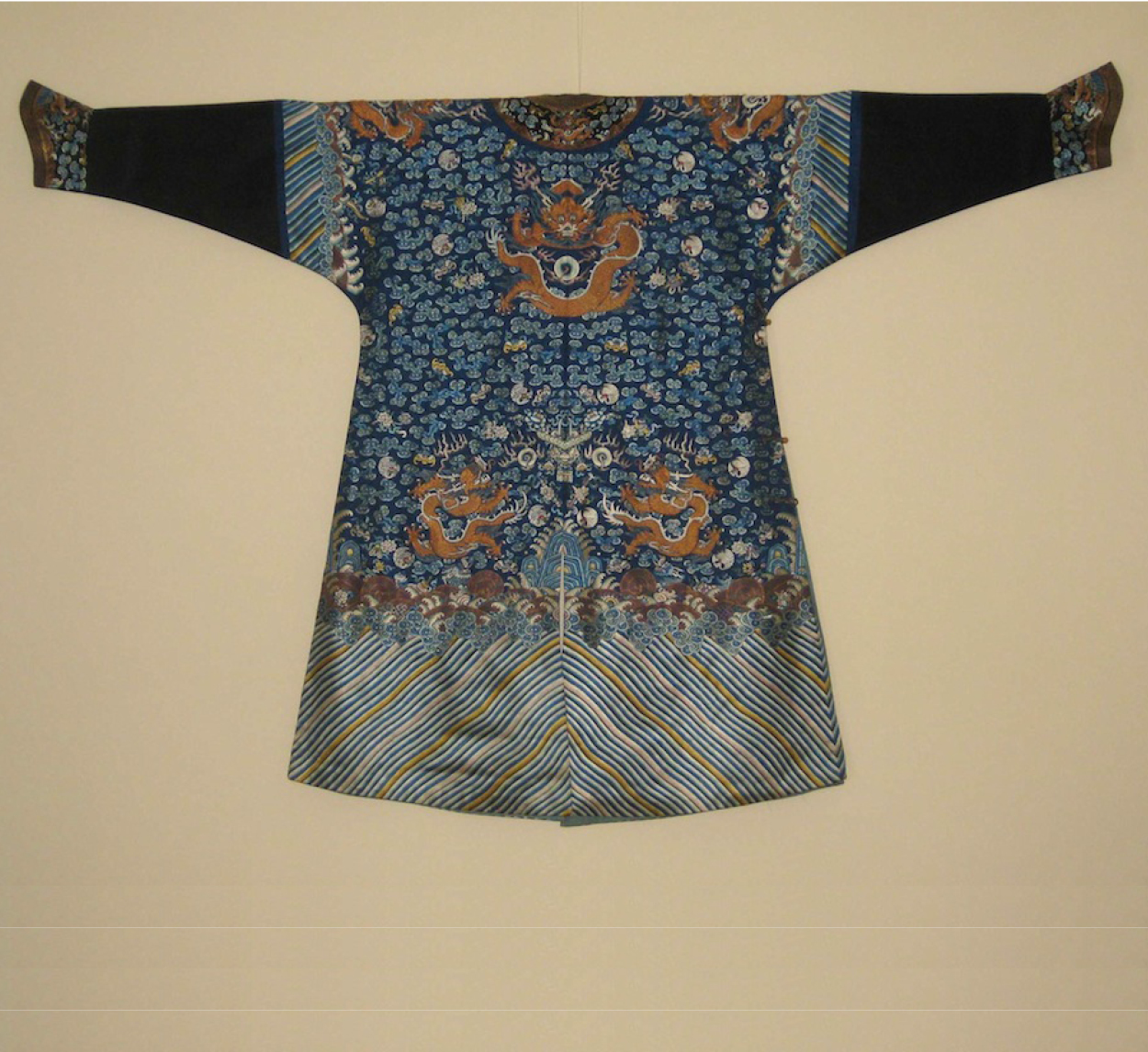 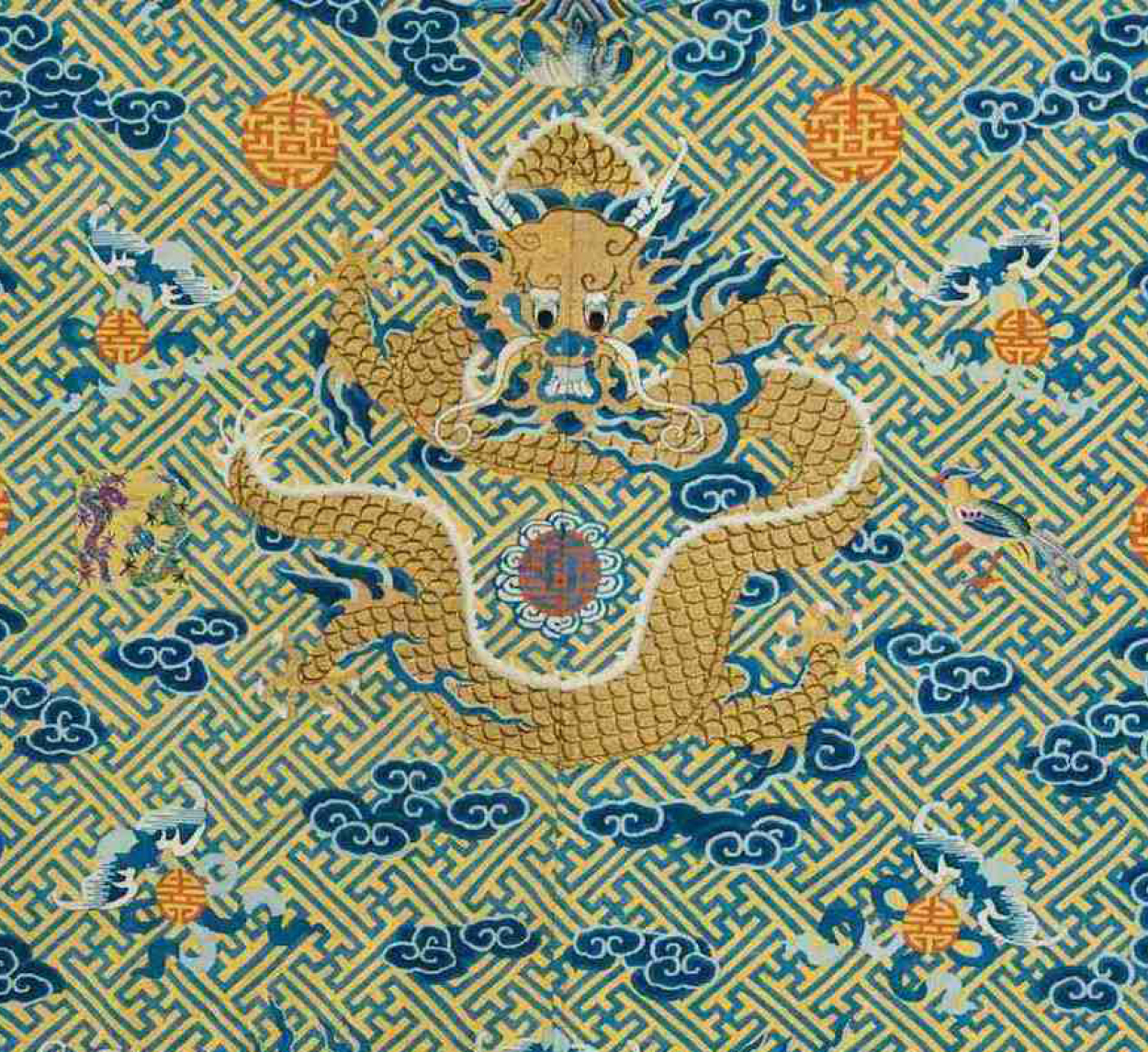 The Manchu had originally obtained luxurious dragon patterned silks from the Ming court, at first given gifts and later, as their power grew, exacted as ransom. The Manchu cut off the wide sleeves of these Ming style robes and replaced with their own narrow, tapered sleeves. This is the origin of the characteristic two-part construction of the classic dragon robes sleeves. Even at the beginning of the twentieth century, when the Qing dynasties rule was itself about to end, this two-part construction was continued as a reminder of the origins of the Manchu. The dragon robe therefore owes its shape to the practical riding robe of the Manchu horseman and the tumultuous events of the mid-17th century. The designs woven or embroidered onto it, however, are Chinese and reflect the gradual assimilation of Chinese ideas by the Manchu during the 18th century. As has already been pointed out, the first Qing dynasty court robes were made from Ming period fabrics decorated with writhing dragons, swirling clouds and turbulent waves. These designs continued to be used with few restrictions during the second half of the 17th century. However, as the Qing dynasty consolidated its hold over China, the Manchu realised that to administer their vast empire, they needed to adopt Confucian ideas about the authority of the emperor and the exercise of power.

During the first half of the 18th century, new laws were promulgated that restricted certain colours, patterns and motifs to particular groups of people. As the imperial court attempted to draw distinctions between the various levels in the imperial hierarchy, these regulations became increasingly prescriptive and the classic design of the dragon robe emerged as a symbol of the new political order that was being established. The classic design of the Qing period dragon robe displays golden dragons placed symmetrically on the body of the robe. Front facing dragons decorate the chest, back and shoulders. Lower down, pairs of profile dragons confront each other on the front and the back. For the highest ranks, a ninth dragon was concealed on the inner flap of the robe. 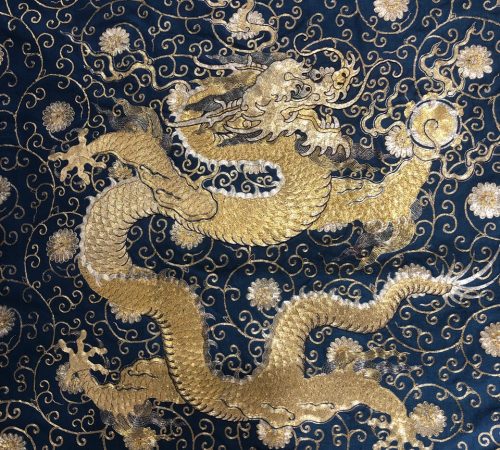 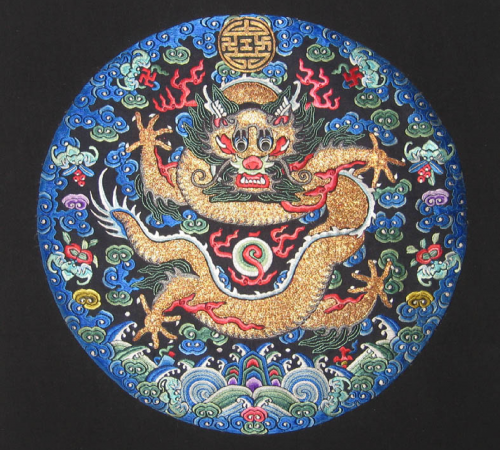 If the side seams of the robe were unpicked and the body of the robe laid out flat, the placement of the eight dragons on the outside of the robe would form the so called Loshu or Lo River Writing diagram. The Loshu was a very ancient diagram consisting of nine squares arranged in a three by three grid. The four front facing dragons on the robe represent the squares of the diagram corresponding to the cardinal points whilst the lower, profile dragons represent the intermediate squares of the Loshu. The ninth dragon, hidden inside the robe, corresponds to the central square of the diagram. The Loshu was mentioned in the Confucian classics and was thought to be a map of the universe. In Confucianism, the Loshu was applied as a model to every conceivable situation from an idealised system of land division, the correct arrangement of a family household to the very structure of the universe itself. It was also a powerful political tool that symbolised the power and authority of the emperor himself. In China, the emperor was not simply the ruler of that great and ancient land, but the Son of Heaven who held a divine mandate to govern and regulate the earth itself. He stood at the centre of the Chinese universe, guaranteeing order by maintaining the cosmic balance. He was enthroned at the very centre of the Loshu diagram, with others occupying the
peripheral squares of the diagram.

As a foreign dynasty, the Manchu carefully cultivated this political symbolism to assert their legitimacy as heirs to the Confucian mantle worn by previous dynasties. The dragon robe therefore carried a powerful political message. The wearer was literally clothed in the universe and the number and disposition of the dragons on his robe indicated his relative proximity to the centre of power. The other characteristic feature of the Qing period dragon robes design is the rainbow stripped lishui or deep-water hem. Whilst origins of this design element can be seen in embryonic form on Ming textiles, it develops into the dazzling stripes only during the Qing period. The reasons are again purely political. Each imperial dynasty believed that it ruled under the aegis of one of the Five Elements of Chinese cosmology: Earth, Water, Fire, Metal and Wood. The Ming dynasty believed that it ruled through the power of Fire. The surname of the Ming imperial family meant red and the dynastic title, Ming or Brilliance combined the characters of the two great luminaries, the sun and moon.

The clan name of the Manchu imperial house was Aisin Gioro, which means Golden Clan. But, in the theory of the Five Elements, Fire destroys or melts the Element Metal. The Manchu therefore adopted the dynastic title Qing or Pure, a character that incorporated the radical for water. In the theory of the Elements, Water destroys or extinguishes Fire. Water motifs therefore play a prominent role in the scheme of the dragon robes design, emphasising the basis of the dynasties power. 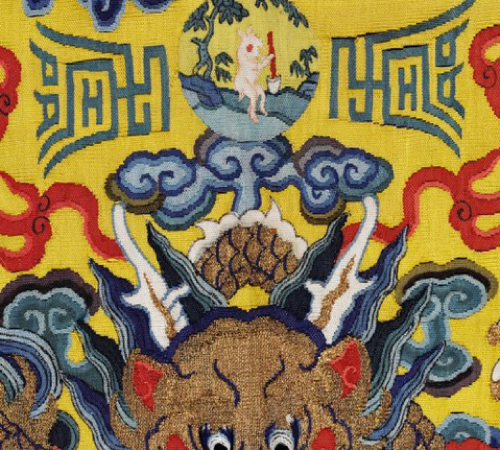 Uniquely, the shape and tailoring of the dragon robe reflects the Manchu desire to maintain their own ethnic identity whilst its designs are a measure of the extent to which the Qing dynasty assimilated Chinese political and cultural ideas. That combination of factors proved successful, producing two of the most famous emperors to ever have worn the dragon robe, the Kangxi Emperor (r.1662-1722) and his grandson the Qianlong Emperor (1736-1795). The empire they created still shapes the political map of East Asia today. And the dragon robe itself was not only a creation of that empire, but its development played a part in the creation of
that empire. 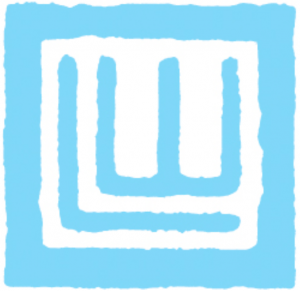